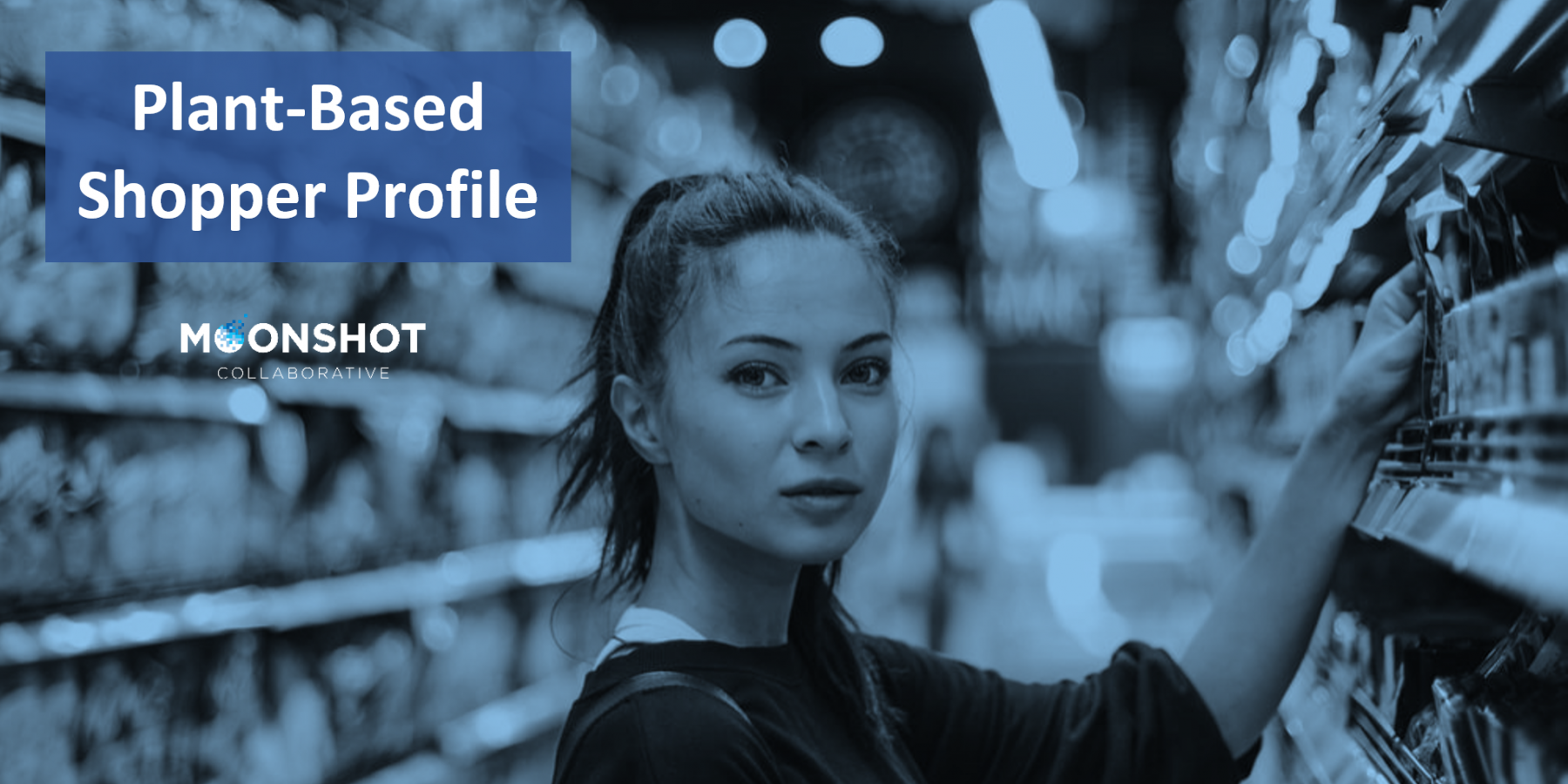 Plant-based foods are all the rage, growing five times faster than the overall grocery industry. Young women are the most frequent buyers, but consumers in all major demographic groups are eating plant-based, primarily due to health concerns. Purchase frequency for many plant-based product categories is low, however, mainly because of cost and taste preferences. We found that most buyers are willing to pay a premium over conventional foods, but the current cost of plant-based alternatives is higher than what many people will pay.

To obtain our sample of consumers for this report, we began by screening participants using a list of both plant-based and conventional foods. Anyone who had consumed a plant-based meat, dairy, or egg product in the past three months qualified. The overall sample mirrors the U.S. adult population in most ways, but has a different age and gender profile.

The sample includes a higher proportion of millennials and a lower proportion of baby boomers than the population. Additionally, the sample includes slightly more women than in the population. Survey results have not been weighted. Over-samples of millennials and women are useful to better understand key consumer groups, but the data should not be considered representative of all U.S. adults or of all plant-based buyers.

The term “plant-based foods” is used in this report to describe those products that directly replace animal products such as meat, milk, cheese, and eggs, as well as meals containing these alternatives. The term “conventional foods” refers to meat, milk, cheese, eggs, and other products derived from animals instead of plants.

Every day, major newspapers and trade publications feature the rise of plant-based eating and the innovative companies that are making it possible. With nearly half of the U.S. population now eating plant-based foods, this is clearly a well-established trend. Plant-based alternatives to conventional meat, dairy, and egg are here to stay—and they’re shaking up the food industry.

In this exclusive report, we discuss the plant-based foods landscape and take a deep dive into the habits and attitudes of more than a thousand plant-based consumers and buyers. The data will help companies and investors understand who is buying plant-based products, how often, and why. The report covers the most important plant-based buyer segments, including both actual and intended purchasers for plant-based foods overall and by product category.

The information provided in this report can help companies better understand the plant-based market opportunity and the consumers that drive it. The survey findings will support your company’s strategic planning, audience targeting, new product development, messaging, and more. It may also inspire ideas for custom research with questions tailored to the needs of your brand. We are uniquely positioned to help you expand upon the data in this report.

The Rise of Plant-Based Foods

The plant-based foods industry is widely expected to continue its meteoric growth as companies innovate and achieve scale. Some leading business consultants have even predicted that plant-based meats will make up 25% of the global meat market by 2040 (2). That would be an annual growth rate of 9% while the conventional meat industry is expected to decline over the same time period. Business experts agree: the future of food is increasingly plant-based.

Who Are Plant-Based Buyers?

Plant-Based Buyers by Age and Gender

The main motivation for people buying and eating plant-based foods is to improve their health. This is true for women and men, as well as people of all age groups, ethnic backgrounds, income levels, and geographic regions. The health motivation was selected by 85% of plant-based buyers. About half as many buyers say they are motivated to purchase plant-based foods to help the environment or improve animal welfare. Other motives include partner influence, lower cost, and spiritual reasons. The average buyer selected two reasons from the list of six.

The main barriers to people eating (and buying) more plant-based foods are taste and cost relative to conventional options. Overall, two-thirds of plant-based buyers and half of non-buyers cite cost as a barrier to buying more plant-based foods. People who have not purchased plant-based products, however, are slightly more likely to cite taste (61%) over cost (53%) concerns.

This is substantially more than other barriers, including availability and concerns about processed foods. It is also in spite of the fact that nine in ten plant-based buyers are willing to pay a premium for plant-based foods. Other barriers include concern about nutrition, not knowing how to cook with plant-based foods, and partner influence. The average buyer selected two barriers from the list of seven.

What Plant-Based Foods Are People Buying? 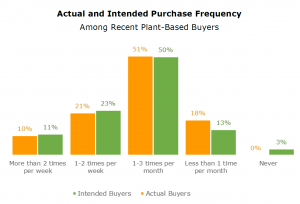 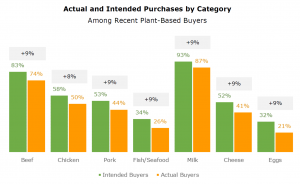 We fielded the survey for this report between June 25 and July 1, 2019, using an online survey created through GuidedTrack.com. We worked with Positly, a quality-screened online recruitment platform, to identify survey respondents and collect data. Positly provided confirmed demographic data for respondents. We sent invitations to a U.S.-based adult sample aged 18 to 80 years. Prior to data collection, we also piloted the survey with 20 individuals.

After data cleaning, a total of 2,068 people participated in the survey. Approximately half of them were screened out of the study because they had not consumed any plant-based meat, dairy, or egg products in the past three months. A total of 1,004 plant-based consumers took part in the study. Of those, 890 consumers have also purchased plant-based foods in the past three months. Respondents spent an average of five minutes completing the survey.

To ensure high-quality respondents, the survey employed two attention checks; respondents failing either check were removed (59 individuals). We also blocked suspicious IP addresses and restricted IP address geolocation to prevent bots. The survey included conditional questions related to plant-based product and category purchases. We only asked about actual or intended category-specific behavior if respondents answered in general that they had purchased or intend to purchase plant-based foods.

In addition to the differences between the sample population and the overall U.S. adult population noted in the previous section, there are limitations to the data included in this report.

As noted in the report introduction, the survey sample includes a higher proportion of millennials and a lower proportion of baby boomers than the U.S. population. Additionally, the sample includes slightly more women than in the population. Survey results have not been weighted. Oversamples of millennials and women are useful to better understand key consumer groups, but the data should not be considered representative of all U.S. adults or of all plant-based buyers.

All results are based on survey data collected in October 2019.
© Original Copyright: Cultivate Insights, 2019. All rights reserved.

Moonshot Collaborative is a consumer research firm that provides unparalleled access to thousands of plant-based and sustainability-minded shoppers to help you understand their purchase decisions and how you can appeal to them more effectively.