Over a series of five surveys between October 2021 and March 2022, we asked our panelists (each of whom has purchased a plant-based meat or dairy product in the 90 days prior to signing up for our panel) about their overall opinion of five common plant-based ingredients: soy, peas, wheat, potatoes, and mushrooms. Let’s dive in.

What is your overall opinion of _______ as an ingredient in foods and beverages?

We find that overall, with the exception of wheat, each one of these ingredients is viewed positively by a majority of consumers. But it’s important to note that it’s all contextual; this finding doesn’t necessarily mean that these ingredients would meet with the same reactions in their widely differing forms.

For example, “soy protein isolate” may be viewed very differently than “soy.” And “pea” as an ingredient in a pasta dish may have different associations than “pea milk.” Nonetheless, it’s interesting to see these high-level consumer perceptions of such common ingredients.

Wheat stands out as the only ingredient for which neutral opinions (43%) outweigh positive ones (40%). Without further research it’s hard to explain why, but this uncertainty around wheat may be related to anti-gluten or low-carb diets. It’s possible that there’s also some consumer confusion at play related to wheat vs. whole wheat. And concerns around the allergenicity of wheat may also be contributing to these findings.

Are you more or less likely to buy a food or beverage product if it contains _______? 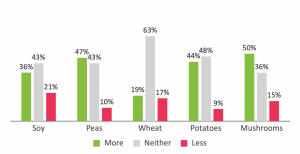 When compared with the last chart, this chart reveals something interesting: while people view soy, peas, and potatoes positively overall, the effect that those ingredients have on purchase intent tends to be much more neutral. The takeaway is that these ingredients tend to have positive perceptions (especially mushrooms, peas, and potatoes), but the ingredients themselves are not major drivers of consumer interest in plant-based alternatives.

And returning to wheat from the prior chart – ‘gluten-free’ claims are prevalent, but almost two thirds of plant-based buyers are indifferent to wheat, as far as their food and beverage purchase decisions go.

When it comes to plant-based food and beverage products, specifically, how likely are you to buy products made from _______?

These findings, which differ pretty substantially from the previous chart, underscore how tweaks in language and methodology can really affect the outcome of the research. By changing the context, and asking about plant-based foods and beverages specifically, our results paint a very different (and much more positive) picture. For alt proteins, it appears that people are open to a variety of ingredients – as long as the taste (and price) meets expectations.

This is one reason why we strongly recommend working with a professional team to phrase research questions, since the simplest words and wording can change things quite dramatically and sometimes result in an inaccurate answer.

What do you think are the benefits of using _______ as an ingredient in food and beverage products? Select up to TWO benefits from the list below. 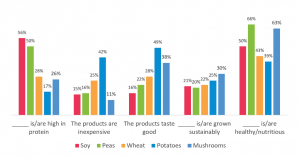 Here are our findings by ingredient:

What do you think are the drawbacks of using _______ as an ingredient in food and beverage products? Select up to TWO drawbacks from the list below. 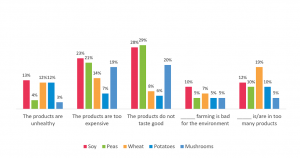 As far as drawbacks, the answer choices that invert the benefits from the previous chart essentially reflect the same findings, as is to be expected. There are, however, some noteworthy exceptions there. For example, while 38% of respondents say that products with mushrooms taste good (previous chart), 20% also say that products with mushrooms do not taste good (this chart), underscoring that mushrooms are a somewhat polarizing ingredient from a taste perspective.

In other findings: wheat is most likely to be thought of as being in too many products (with 1 in 5 consumers citing that). And on the other end of the spectrum, only 5% of respondents think that mushrooms are in too many products. Soy stands out as being perceived as bad for the environment relative to the other four ingredients.

Want to hear our founders speak on this topic, and others related to plant-based ingredients? Watch the webinar we put on with the Good Food Institute here.

Moonshot Collaborative is a consumer research firm that provides unparalleled access to thousands of plant-based and sustainability-minded shoppers to help you understand their purchase decisions and how you can appeal to them more effectively.